The Ancient & Honorable Artillery Company (AHAC) of Boston, Massachusetts, is the oldest military society in North America, having been founded in Boston in 1638 as the Military Society of Massachusetts. Its founder and first captain, Robert Keayne, had been admitted a member of the Artillery Company (later, the HAC) in 1626. Since 1887, delegations from the “Ancients” have frequently visited the HAC in London, while the first of many visits to Boston by members of the HAC took place in 1903; the HAC’s Boston Association is key to this facilitation.

The Sandfontein Artillery Regiment (formerly the Transvaal Horse Artillery) was formally affiliated with the HAC in 1937. Formed in 1904, as “Lys’s Volunteer Corps”, it fought in South-West Africa during the First World War and in East and North Africa during the Second World War. Today, it is a reserve unit in the South African Army.

Following a tradition of an HAC Cadet Battalion during the First and Second World Wars, the HAC has long been affiliated to eight army cadet units and a police cadet unit, as well as hosts an aviation cadet unit. 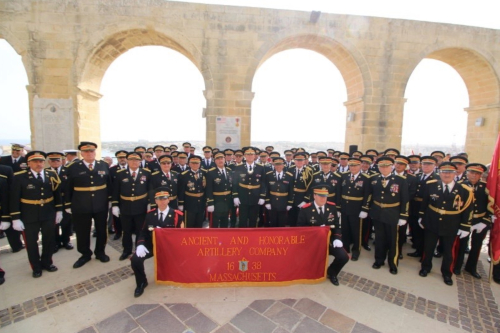