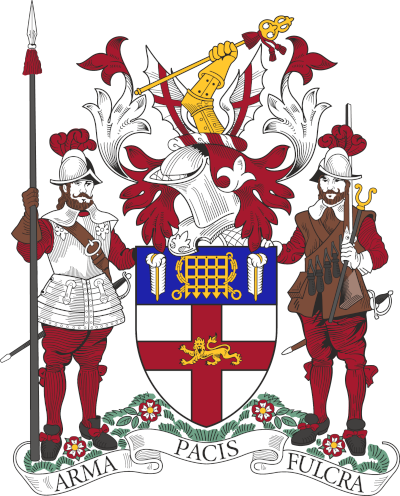 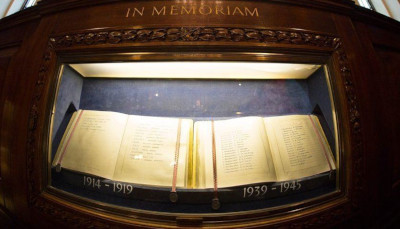 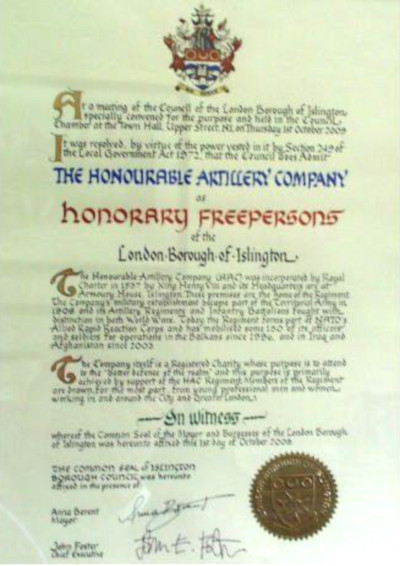 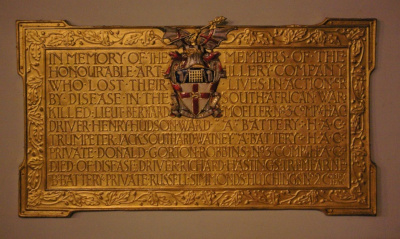 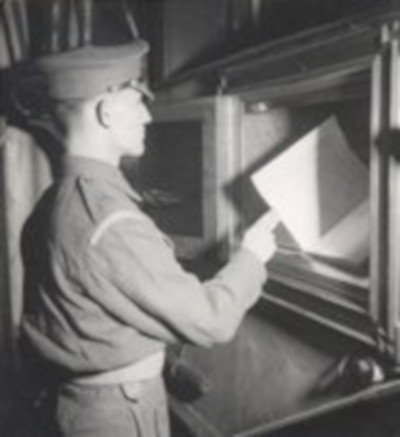 The armorial achievement of the Company consists of a coat of arms, helm, crest and mantling and motto with, as supporters, a pikeman and a musketeer. Unlike other regiments of the British Army, the civilian side of the HAC is a registered charity and the HAC Regiment is the only military body to wear a coat of arms as its badge. The achievement is believed to date from c.1615 and first appears in print as the frontispiece to a military manual published in 1629. In 1821 the Company received its formal grant to bear arms from the College of Arms.

The motto of the HAC is Arma Pacis Fulcra, which can be loosely translated as “armed strength for peace”.

The Company’s Rolls of Honour for the First and Second World Wars are housed in a display case on the landing below the memorial stained-glass windows on the Great Stairs of Armoury House. When in uniform, all ranks of the Regiment salute these books of remembrance the first time each day that they walk past them; if wearing civilian clothes, they give them an “eyes left” or “right”. A page of each book is turned every Wednesday evening by the Regiment’s Piquet Officer.

The Ancient Vellum Book is a composite volume which includes lists of those admitted to the Company between 15 August 1611 and 19 December 1682. Most names have been entered by a clerk but the earliest pages include the signatures of Captain-Generals and Colonels of the Company, and of other distinguished visitors. Almost every monarch from Charles II to George IV has signed the book. It includes the signatures of many other notable figures from the seventeenth and eighteenth centuries.

A second vellum signature book dates from 1817 and contains the coats of arms and signatures of Captain-Generals and other distinguished members and visitors. Queen Victoria was an early signatory and Queen Elizabeth II, on each of her many visits to the Company, has signed the book. It is still customary that the principal guests at the Company’s annual St George’s Dinner sign the book, as well as the Lord Mayor of London on his annual official visit to the Court of Assistants.

On admission to the Company, new members enter their names and addresses into another series of larger membership books, which were originally bound in vellum and begin in July 1780.

On joining the Company, members are required to declare before the Court that they are “well affected to” the Sovereign “and the Constitution of this Country” and that they engage upon their honour to abide by Rules and Orders. Furthermore, they agree “to be obedient to our Officers, to be constant in attending to all our Military Duties, and especially to appear under arms on all occasions when the Company may be mustered for the purpose of assisting the Civil Power in maintaining tranquillity or suppressing riot”.

When toasting or cheering another member of the Company, members are accustomed to give “Regimental Fire”. This takes the form of a nine-fold shout of the word “zay” accompanied by sideways movements of the right hand, culminating in an upward movement on the last and loudest shout. The origin is unknown, but is said perhaps to stem from the movements required to ignite a grenade or from toast drinking in the eighteenth century. If the person being toasted is not a member of the Company, “Silent Fire” is used; here the first eight “zays” are silent, with a shout only on the ninth.

The unusual term “suttling” is used to describe the provision of food and drink, deriving from an Old English term (originating from Dutch) that described someone who sold provisions to the army. An obsolete variant spelling of this word, “sutling”, is still used at the HAC in the names of the Sutling Committee and the Sutling Room at Armoury House.

Father of the Regiment

The Father of the Regiment is the title given to the member with the longest continuous service in the Company. The designation has existed for over a hundred years.

Twice a year, in the spring and autumn, members receive a copy of the Company’s Journal. This is an illustrated publication containing news of events and activities, book reviews, obituaries and articles submitted by members and occasional guest authors. The Regiment is also a major contributor, providing reports from all squadrons and major military exercises.

A bi-annual newsletter, Regimental Fire, is sent out in June and November to inform members of forthcoming events and to highlight other keys pieces of information.

A monthly newsletter is emailed to all members to further highlight forthcoming events and news.